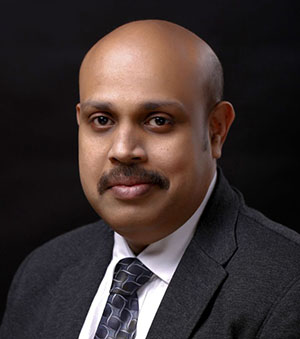 I graduated from TDMC Alleppey in 1993. After completing my diploma and masters in orthopaedics, I started my career in orthopaedics with a brief stint at Lissie Hospital, Kochi. During that time, I developed a true passion for knee arthroscopy and arthroplasty. Soon I joined one year ISAKOS approved fellowship in arthroplasty and arthroscopy at AIMS, Kochi. Subsequently I started my practice at Caritas hospital.Kottayam which was truly a memorable and rewarding experience.

In 2013 , I moved to New Medical Centre, Abu Dhabi, UAE. I am presently working here as a specialist orthopaedic surgeon.

ABSTRACT
A 35-year-old male presented with pain and restriction of movements of right knee of 9 months duration. He underwent open reduction and internal fixation for a coronal plane fracture of medial femoral condyle (Hoffa fracture) in another facility 9 months back. Radiological evaluation showed a malunited isolated medial Hoffa fracture. We did an intraarticular osteotomy as a salvage treatment and got a reasonable outcome. This case report analyses the difficulties in the management of this inherently unstable fracture pattern and the technique of intraarticular osteotomy. 2016 Prof. PK Surendran Memorial Education Foundation.

A 35-year-old male presented to us with pain and limitation of movements of right knee of 9 months duration. His pain aggravated with walking and was affecting his job. He suffered a road traffic accident 9 months back and had an isolated medial Hoffa fracture for which he underwent surgical fixation in another facility. He continued to have pain and limitation of movements after surgery. On examination, he had a fixed flexion deformity of 208 with further flexion up to 808 and an antalgic gait. Radiographs and computerized tomography images showed a malunited
isolated medial Hoffa fracture with an intraarticular incongruity and two screws in situ (Fig. 1)

Reconstructive osteotomy of medial femoral condyle was planned. Knee was flexed to 408 and kept in a lazy figure of four position. Skin incision was made through the scar mark of previous surgery. The malunited fracture was exposed through a medial parapatellar arthrotomy. The Hoffa’s fragment had migrated proximally by more than 10 mm (Fig. 2). A Homan’s retractor was kept close to the posterior border of medial femoral condyle where it meets the femoral shaft. The two screws were removed. The osteotomy site was marked with a cautery. Intraarticular
osteotomy was done keeping the medial collateral ligament and posterior oblique ligament attached to the Hoffa’s fragment. The fibrosis and contracture of the posterior capsule made the reduction difficult. Two Steinmann pins were placed on the medial aspect of the medial femoral condyle and was used as a joystick to aid in anatomical reduction (Fig. 4). The reduced Hoffa’s fragment was fixed with two 4 mm partially threaded cannulated cancellous
screws introduced in anteroposterior direction (Figs. 3 and 4). The screw heads were countersinked. Stability of the construct was assessed and found to be satisfactory. The wound was closed in layers after achieving hemostasis. The knee was immobilized in a cylinder cast for 2 weeks.

After 2 weeks, knee mobilization was started. Weight bearing walking was deferred till 2 months. Computerized tomography images at 3 months showed a congruous articular surface of distal femur (Fig. 5). At 3 months follow-up, his range of movements of knee was 58–1108 and he was walking full weight bearing. On further follow-ups at 4 months and 5 months, it is noticed that he develops pain when flexion beyond 1108 is attempted. His residual
pain and stiffness of knee could be due to the fibrosis and scarring from the revision surgery. However, intraarticular corrective osteotomy could moderately improve his range of motion of knee and gave a better articular congruity, which may delay the onset of secondary osteoarthrosis.

A written informed consent from the patient and formal permission from the institutional ethics committee is obtained for publication of this case report. A search into the currently available literature shows that several aspects of this rare injury pattern are controversial. Although it is agreed that surgical fixation is the preferred method of treatment in Hoffa’s,1 there is a lack of consensus in the surgical approach, mode of fixation, type of implant, and rehabilitation protocol in Hoffa fractures.1 Failure of fixation, nonunion, and malunion are common complications with this intrinsically unstable fracture pattern. The vascular anatomy of the medial femoral condyle and the physiological stresses in the fixation construct are two major factors that surgeon needs to consider in the management of a medial Hoffa fracture. The intraosseous blood supply to the medial femoral condyle has a watershed region of limited vascularity compared to lateral femoral condyle. The extraosseous arterial supply of the medial femoral condyle is primarily contributed by the superior medial genicular artery whereas the lateral femoral condyle is supplied by both superior and inferior lateral genicular arteries. 5 Disssection on the posterior surface of medial femoral condyle can jeopardize this vascular contribution and can predispose to osteonecrosis of medial femoral condyle.

The fixation construct is continuously subjected to physiological shearing stress in sagittal plane during flexion and extension and varus and valgus stress in coronal plane. Biplanar stresses during rehabilitation can lead to failure of construct.6 Although lag screws can provide interfragmentary compression, it cannot neutralize the shearing stresses. Placing a buttress plate on the posterior surface can counteract the shearing stresses. Tetsunaga
et al. described a technique of placing a posterior buttress plate along with a lateral compression plate for enhanced stability. However, posterior plate placement is technically challenging. Jarit et al. in a biomechanical study showed that placement of screws in a posteroanterior direction gives more stability. However, in the clinical setting, it is difficult to put screws in a posteroanterior configuration. Borse et al. demonstrated the use of headless compression screws in Hoffa’s fracture. Xu et al. described a novel method of fixation with one screw inserted from the femoral intercondylar notch, and the other two screws inserted from the nonarticular lateral (or medial) surface of the fractured condylar fragment. Iwai reported a case of intraarticular corrective osteotomy for malunited lateral Hoffa fracture with a good outcome. Corrective osteotomy for a malunited medial Hoffa fracture is technically even
more challenging due to the relative difficulty in accessing the articular surface of medial femoral condyle, the precarious blood supply of medial femoral condyle with subsequent chances of aseptic necrosis and the difficulty associated with hardware placement. Computerized tomography images are mandatory in the preoperative planning of Hoffa’s fracture. Keeping the knee in a lazy figure of four position enables better visualization of entire
medial femoral condyle and a convenient angle to perform the osteotomy and fixation. The dissection on the posterior surface of distal femur should be minimized keeping in mind the precarious vascularity of medial femoral condyle. The femoral attachments of medial collateral ligament and posterior oblique ligament should be preserved during dissection. The insertion point of posterior cruciate ligament should be taken into consideration while
determining the plane of osteotomy. Sustained traction with the aid of Steinmann pins as joystick helps in getting anatomical reduction. Various screw sizes ranging from 3.5 mm cortical screws to 6.5 mm cannulated cancellous screws have been used and evaluated by various surgeons. AO recommends 3.5 mm or 4.5 mm screw systems for this fracture. Two 4 mm partially threaded cannulated cancellous screws introduced in anteroposterior direction with countersinking the screw heads gives good stability. Lewis et al. suggested immobilization in full extension for
6 weeks in case of concern regarding stability of fixation.  Few authors recommended immediate unrestricted range of motion of knee following surgery.14,15 However, we feel immobilization in a cylinder cast for first 2–3 weeks is mandatory, considering the fact that lag screws alone cannot counteract the biplanar deforming forces on the construct.6 Weight bearing walking should be delayed for 2 months to allow fracture consolidation. Reconstructive
osteotomy is a reasonable salvage option for a malunited Hoffa fracture as it can reduce the pain, improve the range of motion of knee, and delay the onset of secondary osteoarthrosis of knee.

Accurate anatomical reduction and stable fixation during the index surgery are extremely important in preventing malunion of Hoffa’s fracture. Proper positioning of the knee and meticulous dissection respecting the vascular anatomy are crucial during the surgical fixation of medial Hoffa’s fracture.

Intraarticular osteotomy is a feasible salvage option for malunited medial Hoffa fracture with a moderate improvement in the range of motion of the knee and a reasonable outcome.

Conflicts of interest
None.